When it comes to exploring the wild blue yonder, there is nothing like taking to the road in a recreational vehicle (RV). These incredible vehicles allow you to take your home with you while you travel around, which is why they are so popular with many different people. Whether you plan on taking a week vacation or you hope to retire and tour the country in one, there’s nothing like spending time in an RV.

One thing to keep in mind, though, is safety. Since you are bringing the amenities of home with you, you should also bring the same kind of precautionary equipment as well. In this case, we’re talking about fire extinguishers. These handy devices can make the difference between life and death, which is why you should always bring one along on your adventures. Today we’re going to look at the best models to have inside of your RV as well as go over the various components that make a good extinguisher.

How to Choose a Fire Extinguisher

Since RVs have limited storage space, that means that every inch counts. As such, you want to get an extinguisher that doesn’t take up too much room, but that has enough suppressant inside to quelch any fire that may occur. Overall, try to get a unit that fits the size of your RV. So, smaller models should do fine with an aerosol can, and full-size RVs should have something larger, just to be safe.

When looking at various extinguishers, you’ll notice that they all have letters printed on the side. These refer to the kinds of fires that they are rated to put out, so it’s crucial that you find the right one for your needs. Here is an overview of each letter.

● A: fires that start with dry flammable material such as wood and paper

● B: flammable liquids, such as grease or oil fires

● D: flammable metals (you won’t see this for RVs)

● K: designed for commercial kitchens that deal with large quantities of flammable liquids, like fryer oil and such

Most extinguishers are rated for multiple numbers, with the most common having an ABC rating. When it comes to an RV, you should get one that at least has two letters covered, although an all-around extinguisher would be better. 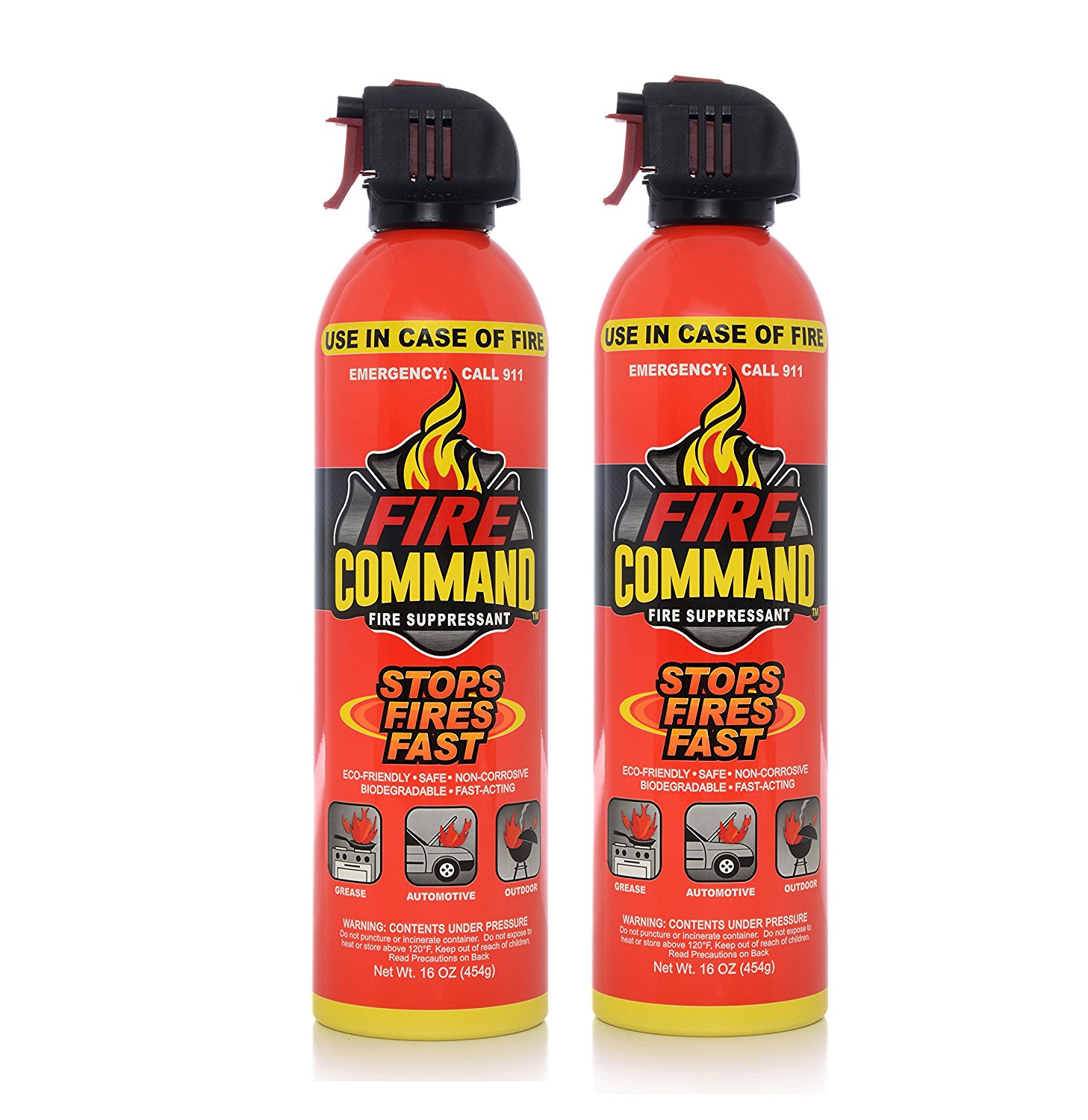 When deciding between different extinguishers, you’ll notice that some units are disposable while others are refillable. Aerosol cans like this one from Fire Command are meant to be used one time and then disposed of, meaning that you should have a couple on hand just in case. With this set, you get two cans, which can be a great addition to your RV. Keep one up front by the engine and one in the kitchen area, and you should be golden.

What we like about this extinguisher is that it uses expandable foam to suppress the fire. As a result, it shoots up to ten feet to keep you at a safe distance from the fire, and it lasts up to 60 seconds when firing. Some aerosols can only do about half of that, which is why this is such an improvement.

Finally, this can lasts up to three years, so you won’t have to worry about replacing it anytime soon. Nonetheless, you should pay attention to expiration dates as they really matter with these kinds of extinguishers. 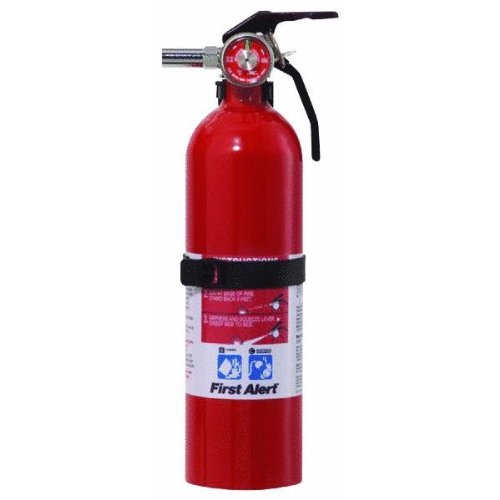 If you want something a bit more reliable than a disposable aerosol can, then you probably want to upgrade to this model from First Alert. Although it’s not a full-size fire extinguisher, it is still much more durable and has better performance than most disposable units. Best of all, it’s rechargeable and refillable, so you can keep it on your RV for years to come without worry.

As with all extinguishers that use a pin and trigger system, this model has instructions on the side. They are large and easy to read, which should allow you to use it in an emergency without any hassle. Not only that, but it comes with a pressure gauge system so that you can see if it’s still within the optimal range. If it ever gets into the red, then you have to take it to your local fire station to get it recharged.

Other features that we like include the fact that it only weighs two pounds, as well as that it comes with a mounting bracket for convenience. This means that it won’t take up counter or cupboard space in your RV. 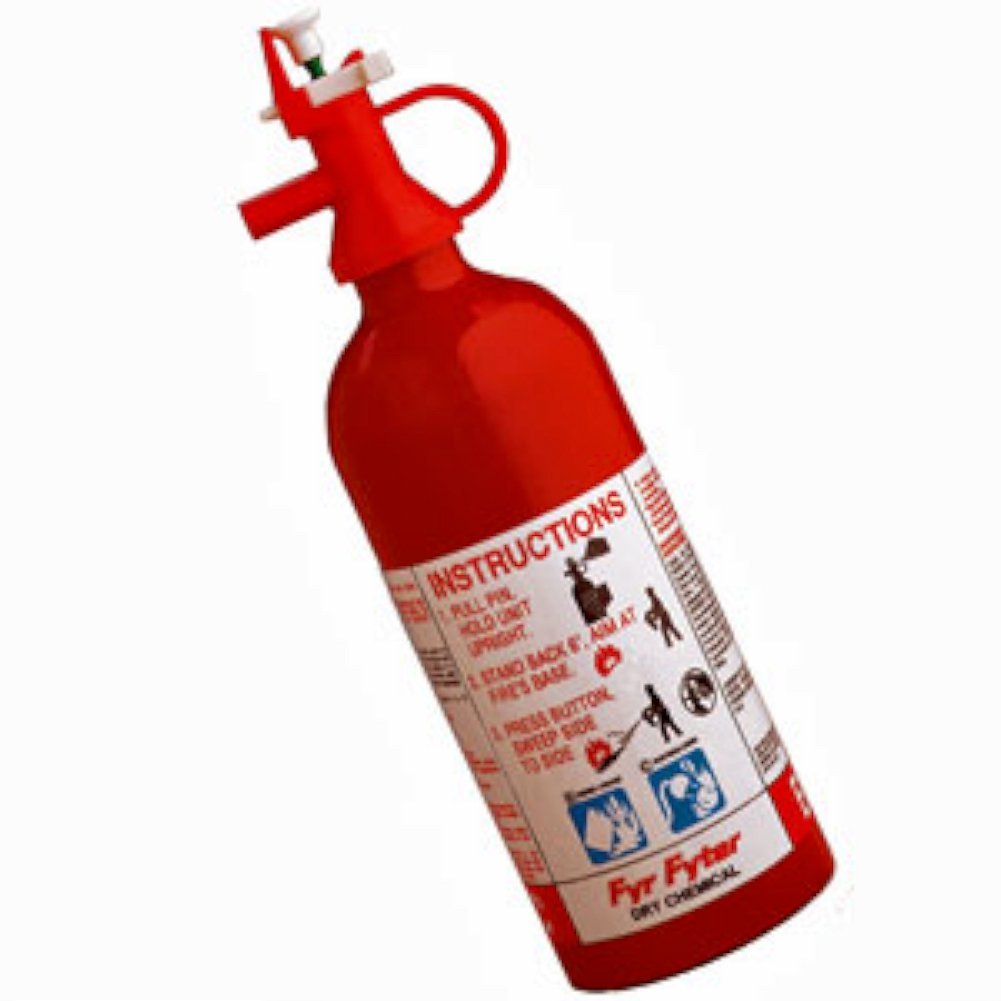 Next, we have a disposable extinguisher that is built specifically for RVs. If you’re curious what makes this one more special than any of the others, the reason is that it has a thick plastic tank that won’t get too pressurized and it comes with a loop at the top for hanging. So, if you venture out into hot territory, you won’t have to worry about this extinguisher popping open or leaking all over the place.

As far as performance goes, this unit is rated for B and C fires, although it should be able to handle A fires relatively well. It weighs just two pounds, and it has a compact design that fits almost anywhere in your RV. It uses a modified pin and trigger system to prevent accidental discharge, and it has easy to follow instructions in the event of a fire. Finally, it’s rated to last up to three years. 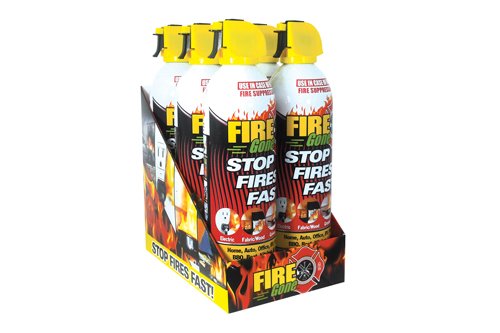 Next, we have another aerosol extinguisher that can provide fire suppression in an instant. The design of this model is similar to the Fire Command unit, meaning that it uses an intuitive trigger system to make operation even easier.

What we like about this extinguisher is that it’s rated for all three kinds of fires (A, B, and C). Considering that most RVs are made with wood paneling and other flammable materials, it’s nice to have something that’s rated for any kind of fire that could erupt. That being said, B and C extinguishers shouldn’t have a problem, but it’s more comforting to have the extra rating.

The other cool thing about this set is that you get six cans. That means that you have plenty of backups if something goes wrong, and you can put them wherever there may be a hazard. Keep a couple in your home’s kitchen and have a couple more in your RV. They are rated to last up to four years, and they only weigh about a pound.

One problem with most fire extinguishers is that they can cause a huge mess when putting out the flames. If you are dealing with electronics, this can be a major hazard and damage the internal controls, rendering it useless. In this case, though, the H3R Performance Extinguisher is built to minimize collateral damage and allow for an easier cleanup process. It uses liquefied gas instead of foam or dry chemicals, which is also more environmentally friendly.

Other features that we like about this extinguisher are the durable chrome finish, the heavy duty pressure gauge, the mounting bracket that’s provided, and the fact that it’s rechargeable.​

Overall, if you want the best performing extinguisher, this is the one to get.

When it comes to keeping your RV safe, you want something that is super reliable and won’t let you down if the worst should happen. For that reason, we highly recommend either the First Alert Fire Extinguisher or the H3R Performance models. We like the fact that they are refillable and rechargeable, and they provide better results every time. While portable aerosol cans are great as supplemental suppression, we prefer to have something with extra oomph. However, if size is prohibitive for you, then Fire Gone is our top pick for disposable extinguishers.

About the Author Darrell Webster

I believe there is a handyman in all of us as long as you have the right tools. I started this blog to help anyone who is interested in fixing things to learn their way around the different tools and to know how to perform different DIY tasks. I have been doing this for years and believe I am a master of this art.